Dual is not a name that is frequently spotted in audio equipment stores or online today, but once upon a time it was the biggest manufacturer of turntables in Europe. 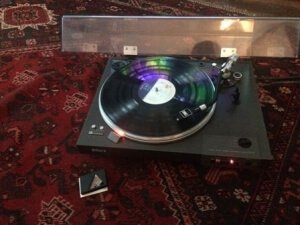 Dual turntables were named from pioneering dual-mode power supply technology from the early 1900s, Dual was first established in the years leading up to the Second World War when, like many other industries, the production of turntables came to a sudden halt.

Fast forward to the late 1940s and Dual’s founders, brothers Christian and Joseph Steidinger, started up the business again and became so successful that at one point it was the biggest turntable company in Europe.

In the 1980s, newer and cheaper audio equipment reached the European markets from Japan, and Dual lost its reign in the world of turntable manufacturing before going bankrupt in 1982.

The company’s financial decline never stopped vinyl fans from using Dual turntables though, and the brand has become something of a cult audiophile product, complete with a European comeback in 2017.

As can be expected from such a prolific manufacturer of turntables, Dual has created several different models over the decades and some are still highly regarded within the music industry. This is mainly down to Dual’s reputation of manufacturing products that are built to last for people that are committed to growing a record collection and developing their knowledge of turntables.

Let’s start by looking at what makes Dual turntables so unique.

The name Dual refers to the technology that allowed gramophones to be powered from both mains electricity and a wind-up mechanism. As the 20th Century progressed and electricity became more mainstream, there was less need for the dual power system, but the Dual name and brand survived as the technology advanced.

Today, second-hand Dual turntables can be found online for around $200 to $300, and, as long they are still in good condition, the record players are still as dependable as most new mid-range models on the market.

Buying a used turntable is also an environmentally sustainable option and adds an extra dose of retro vibes to listening to vinyl music.

Reviewers have raved about the MTR-75 model, particularly about the automatic operation that allows the user to press start and simply watch while the turntable does the rest – lift the tonearm and position itself onto the record, leaving the listener to sit back and enjoy.

Then, once the music has stopped playing, the tonearm lifts itself up again and returns to the rest.

Other noteworthy features are a belt-driven twin speed motor at both 33 and 45 rpm, and a built-in moving-magnet preamplifier to directly connect the turntable to a speaker system for enhanced sound quality.

MTR-75 also includes a USB type B output to connect to a PC or Mac for the direct digital recording and an Audio Technica cartridge system.

The only downside to the MTR-75 is that the model has to be put together like flat-pack furniture (unless buying a second-hand model, in which case it should already be built), but the turntable is easy to assemble, and everything is provided in the box.

The black satin finish is not quite as authentic as with other models, but the sound quality and automatic operation will more than make-up for any shortcomings with the MTR-75.

This particular Dual turntable hit the market in 1981 and even made it onto a 2018 What HiFi? List of the best turntables. In the words of What HiFi?, the CS505 is “a tidy, well-balanced performer that managed to bring a decent amount of detail to the table without exposing the entry-level kit it usually worked with.”

In other words, it’s a reliable, easy-to-use model that delivers the desired result of decent sound quality at an affordable price.

In 2019, the fourth generation of this classic Dual model was released and was highly praised by reviewers. Despite the CS 505 being a budget option on the turntable market, the CS 505-4 features a suspended sub-chassis, which reduces vibrations on the top plate for a smoother sound quality.

It also incorporates a semi-automatic operation that lifts the cartridge and switches off the motor at the end of a record, and the speed can be alternated between 33 and 45 rpm.

As a modernized version of the original CS 505, not much has changed in this latest model (apart from the price), but perhaps that’s because the design works and the sound quality is good. After all, if it ain’t broke, don’t fix it.

From a quick online search of the Dual turntables, a model that will repeatedly come up as one of the best is the 1229. Audiophiles have long praised the automatic design and low level of vibrations that come from the heavy platter. Some have even labeled it as one of the best turntables of all time.

So, what makes it so great?

The tonearm measures at 8.75 inches, which in the 1970s was the longest of any automatic tonearm. The 1229 also has a continuous-pole motor with radial elastic suspension, a non-magnetic, dynamically balanced platter, and can play records at 33, 45 and 78 rpm.

Basically, it’s a prime example of Dual’s superior craftmanship and ability to build a solid turntable with excellent sound output.

Today, second-hand models can be found online, especially in Europe, but due to the legendary status that the 1229 has garnered in music circles, these turntables are not usually found at budget prices. Sourcing replacement parts can also take some research, but for committed Dual fans, the extra effort is worth it for the enjoyment of playing music on a 1229 turntable.

The 1019 is another popular Dual turntable and it was released before the 1229. Like the 1229, the 1019 is fully automatic and is also well-regarded in music circles, although it has never acquired the legendary status that accompanies the 1229.

Nevertheless, today it’s considered as a collector’s item, which means the design has withstood the test of time.

In comparison to more modern turntables, the 1019 is quite heavy and not a model to be transported around, but its solid structure is what has helped it to age gracefully. The 1019 is renowned for its ability to play at 78 rpm with a powerful torque from the idler drive.

On the downside, the 10-inch platter can omit vibrations (unlike the 1229) and it has been reported to have poor speed control.

Despite the minor misgivings, the 1019 is still regarded as a classic Dual turntable for its high-quality playback of 78s and authentic, wooden design. As the 1019 is now an antique, the model does require some TLC to keep it running in good order but is still giving out an excellent sound quality for music fans looking for a real vinyl experience.

The Dual brand has a long history spanning life-changing moments in history and technological innovation. In the post-World War II decades, Dual helped to make vinyl music more accessible by designing and releasing high-quality turntables, with a focus on strong craftsmanship that has endured to this day.

The Dual name is still synonymous with vinyl music, long after the company was closed and sold off throughout the 1980s and 1990s.

To get hold of a Dual turntable today, they can be found on popular online marketplaces, as well as in specialist music stores and antique shops. As the brand is from Germany, the older models are more readily found in Europe, but the classics are still available in North America as well – you may just have to dig a little deeper to find them.

But which model is the best? For ease of use and sound quality, the CS 505-4 ticks all of the right boxes, but for authenticity and outstanding craftsmanship, the crown has to go to the legendary 1229.

What happened to Dual turntables?

In 1927 Streidinger Bros. adopted the name Dual because of the dual-mode power. Soon after they began producing turntables. In 1982 Dual went bankrupt and was sold to Thomson SA. In 1988 Thomson would Dual to Schneider Rundfunkwerke AG.

I won’t list all the reasons why you could be looking for the best record player under 100. But I’ll bet you want to know…

Let’s not kid ourselves… Getting into vinyl is not cheap. Sure, you can pick up some vinyls for a few bucks at a thrift store…

It’s all about budget baby! If you’re looking for the best turntables under 400 dollars to suit your budget, you’re in the right place. Vinyls…

If you’re new to vinyl, you’re on a tight budget, or you have limited space available, opting for a turntable that has the preamp built…