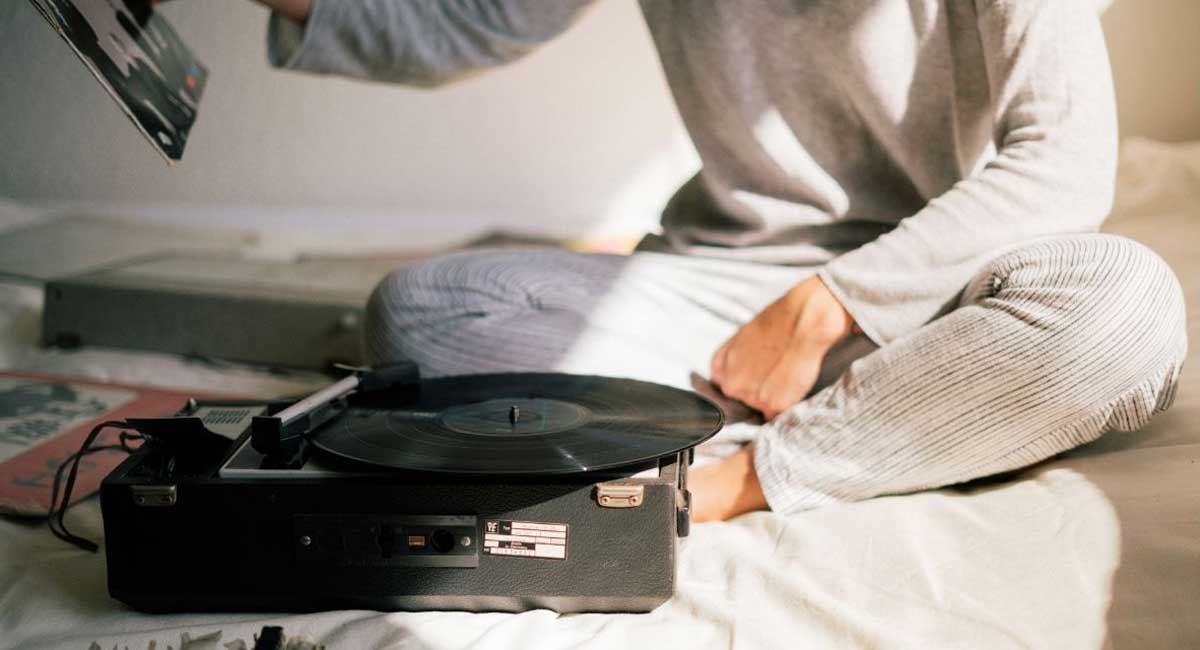 As with every good thing, specific issues can come up when playing vinyl records. One of these issues is record skipping.

Imagine playing your favorite song and having the record skip forward or backward seemingly randomly. This can be extremely annoying and a big vibe-killer that interrupts the natural flow of otherwise awesome music.

It’s essential to understand what skipping is, how it occurs, and how to fix it. This article provides all the information you’ll need.

What Are Vinyl Records?

Let’s start simple. Vinyl records, also known as gramophone or phonograph records, are analog sound storage media that take the form of flat discs. These discs have inscribed, modulated spiral grooves on them. The groove starts at the outer areas and spirals towards the center.

Vinyl records are exceptional products from what some might call a bygone era. However, it’s not up for debate that they offer a fantastic sound quality. 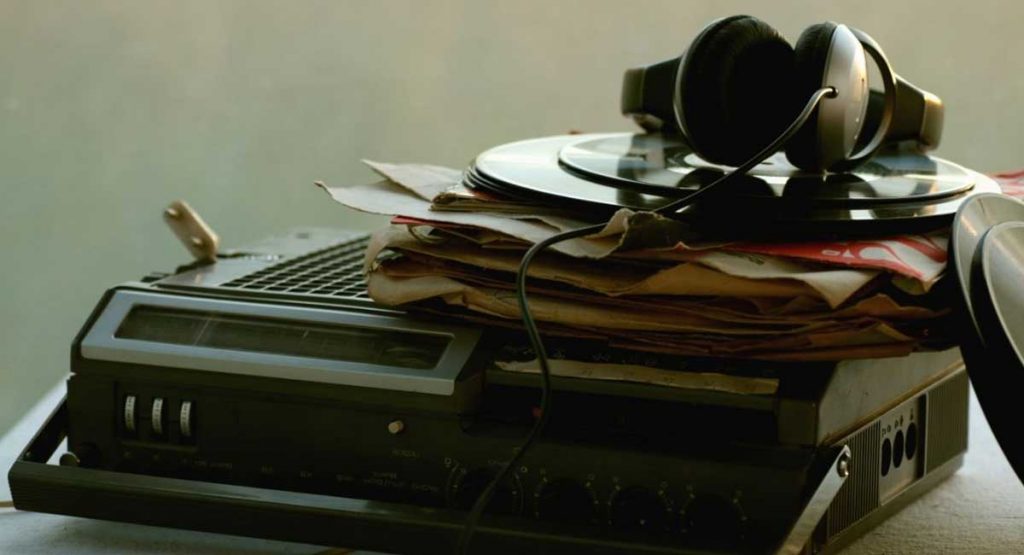 Many vinyl fans even claim that the sound quality is better than digital recording formats, as vinyl preserves the original recording as it was meant to be heard.

What Is Record Skipping?

Vinyl records are designed to be played on record players. Records spin on the platter and a stylus attached to an arm on the record player runs through the grooves on the disc, starting outside and progressing inwards.

With the vinyl record rotation, the stylus picks up the recorded sound waves on the record, amplifies them to the listener through speakers. Record skipping occurs when the stylus makes non-continuous contact with the record.

This can make the stylus jump to another groove and continue from there. If the stylus moves on to an inner groove, the player will skip a section of the music entirely. However, if the stylus moves to an outer groove, it will return to the same point and keep repeating this motion.

This will lead to an endless loop of the same sound section over and over again. It’s from this occurrence that the common expression “like a broken record” originated.

Why Do Record Players Skip?

Now that we know what record skipping is, why records skip at all is a question that comes up. Record skipping can be caused by various reasons, ranging from very simple causes that are easy to fix to complex causes that may be impossible to fix.

Some common causes of record skipping are the following:

When a record is kept in storage, it’s quite natural for the dust to settle on it. This isn’t helped by the default cardboard sleeves that vinyl records come in. While a special dustproof case can be used to store records, there are still other ways that a record can get dirty.

Handling a record with dirty hands or in a dusty environment can also make the record grungy. Oil from your fingers which may come in contact with the record grooves, can also be an issue.

In some cases, the record may have been accidentally smudged at the point of production. This can cause skips when the record is put into the record player.

Static charge is widespread in dry areas with low relative humidity, and this can cause two types of issues.

The first is an audible popping sound, and a slight record player skip when the stylus gets to the point of the static charge. The other problem is that static charges attract dust particles and cause them to adhere to the record.

Vinyl records can be damaged in various ways, and these can cause the record player to skip sections of the grooves. A typical incident of damage that affects records is scratching.

Often, the scratching of a record is the result of improper handling and storage. Scratches around the grooves of the vinyl record can distort the previously recorded sound waves. Scratches that cut across the grooves can also make the stylus jump to another groove and continue from there.

Records can also be warped, and this affects the record player output. Warping occurs when the vinyl disc is bent. This could be an apparent defect, or it could be a subtle one.

Vinyl records can be warped due to heat, pressure, or a production error. A warped record means uneven pressure is put on the grooves by the stylus. When it gets to areas with extremely low contact pressure, the stylus may skip to another groove.

Record players should be on a firm, flat surface that won’t shake easily and disturb them. If mounted on an unstable or shaky surface, for example, a table with uneven legs, there will be a tendency for the player to skip.

A table that’s too lightweight and on a floor that easily conducts vibrations can also be a problem. When the table shakes, the movement and impact can cause the stylus to move out of the groove or jump to a different groove.

Mounting other equipment on the same table as the record player can also cause it to skip. If vibration-generating equipment is mounted on the same table, there’s a likelihood that the stylus will be affected by those vibrations and miss a groove. Be cautious with external speakers and fans for this reason.

The process of wear and tear comes naturally with use. As the record player is used for more and more records, the stylus can get worn out and may no longer perform as expected. It’s a bit of a challenge to observe stylus wear with the naked eye, so a magnifying glass should be used.

Generally, the stylus should be checked for areas of one-sided wear, dullness, or jaggedness.

Stylus age, on the other hand, isn’t dependent on how often it’s used. Whether a record player is used or not, the stylus tends to harden with age. An old, hard stylus will not track effectively and is more likely to skip groove sections.

While the stylus may only be lightly used, its age may dictate that a replacement is necessary.

Sometimes, the setting of the record player is what’s responsible for the skips. The stylus may be pressing against the grooves with too little pressure, causing it to lose contact with the vinyl or even switch grooves periodically.

The stylus may also be applying too much pressure and distorting the sound from the record. Always try to make sure that an even balance of pressure is placed on the record grooves.

How to Fix Record Player Skipping

Fixing a record player’s skipping depends on the cause of the problem and fixing it accordingly. However, please note that not all issues may be fixable, and in such cases, it’s best to replace the damaged record. 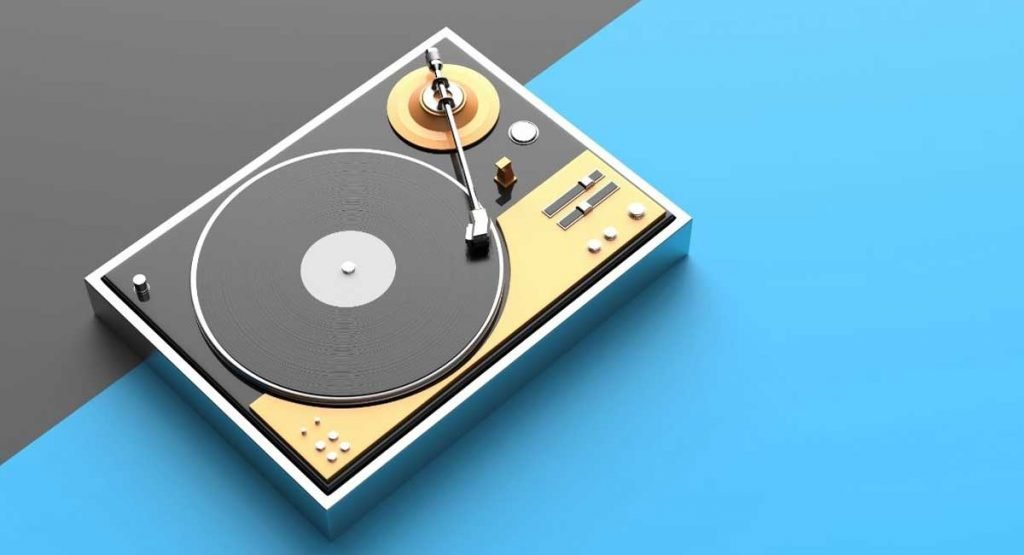 Get Rid of Dust and Dirt

The cleaning of dust and dirt is best done on a record cleaning mat to avoid the record player’s recontamination. Cleaning can be done in the following ways:

Get Rid of Static

There are several ways to combat static build-up on records. Some of these methods are preventative, while others are corrective. They are outlined below:

Use a Proper Turntable Setup

The proper setup of a turntable can prevent many issues with skipping. Some good practices that will reduce the chances of your record player skipping include the following:

Replace a Worn or Old Stylus

Once the stylus has been confirmed to be worn out or hardened by age, it’s finally time to head to a store and purchase a replacement. Replacing the stylus prevents record skipping and improves sound quality, and prevents damage to the records.

Keep in mind that replacing equipment can get very expensive, so always try to keep your record player in the best shape possible.

Adjust the Tonearm and Stylus

The tonearm and stylus may need adjusting to press against the record with just the right amount of pressure (not too much or too little). In classic record players, when the pressure was too low, a coin was used as a weight to hold down the stylus.

After adjusting the stylus and tonearm, the anti-skate control mechanism, if your turntable comes with one, should also be set to the same weight as the tracking weight on the tonearm.

The warping or bending of records is often permanent and not fixable. Attempts to forcefully straighten out the record can cause it to sustain even more damage or get broken entirely.

It may also sometimes be the case that none of the above fixes will work, even if the record isn’t warped. In those cases, it might be that there’s permanent damage to either the record or the record player itself.

To confirm whether it’s an issue with the player or the record, try playing other records on the player. If they all play without issues, then the original record is damaged. If the player continues to skip with different records, the record player itself is likely damaged.

There’s nothing more annoying and frustrating than a record player skipping on some of your favorite songs. Be systematic and try to figure out what’s causing the skipping first. Then you can use some of the strategies in this article to get your player back on track. Good luck!